Our Administrative Office remains closed to the public due to COVID-19, but we are still open to serve you remotely. Please note that the Planning & Regulations department is receiving a higher than normal volume of planning applications and is working as quickly as possible to respond to all of them. 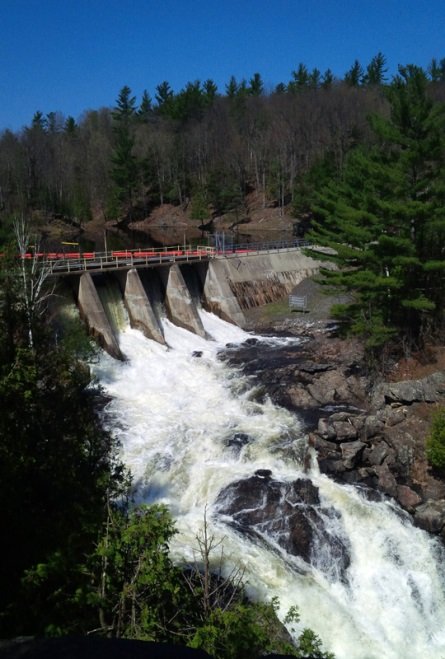 Another absolutely gorgeous stretch of water through the four sets of rapids. The directions in the canoe route brochure are specific and easy to follow and while the water was high, I was only able to run and line part of the first one but had to line or portage sections of the others – some of it not that easy to line while the portages were relatively easy.

Once into more open water suddenly down came the rain to the extent that even vision was affected. That little obstacle notwithstanding, I found my way into the south end of Stump Lake and headed north for about 2 km. The turn east was not hard to find but then the way became difficult because of the many islands. The best advice I can give is to stay left even when having to angle back south to do so. Eventually one spots a mock mini Lighthouse at which point one turns 180* around a point and shortly thereafter back into the river.

Not wanting to drag/portage the 1,200 m I found a launch site just below the generating and was soon on a roller coaster of rapids, with set after set of two to four feet high kickback waves hammering me head on. With no option I gave in and had a fantastic ride as if on a sun-fishing bronco. With 100 meters to the bridge I glanced up at it thinking “Yahoo, I made it!”

By the time my attention went back to the water it was too late as a monster kickback caught and angled me so that when I hit the next one it was all over. In a flash I was thrown but able to hold on to the kayak. I spent those last meters bouncing off rock after rock until being shot out 300 meters into Dalhousie Lake -rather glad Liz was not there waiting.

Flipping the kayak upright I clambered on delighted to spot my “9,000km” paddle about 200 meters away. I hand paddled over, gave it a wee kiss, and headed for the beach –trailing traces of red in the water as I went –the bleeding had stopped by the time Liz got there so only my many bruises and injured ego showed…

Read all Bob Kelly’s posts from his paddle of the Mississippi River Canoe Route in the spring of 2013.